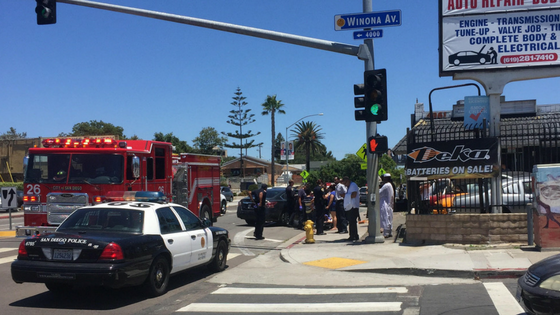 On June 27, Circulate San Diego, the City Heights CDC and their partners at the Kresge Foundation, Smart Growth America, Transportation for America and the National Complete Streets Coalition met with partners from the City of San Diego to spend the day addressing the numerous benefits of placemaking and complete streets initiatives in the City Heights neighborhood in San Diego. Chief amongst the benefits discussed was how complete streets and placemaking can be utilized to improve pedestrian and bicyclist safety in all San Diego’s neighborhoods.

Thankfully the pedestrian seemed to only suffer from minor injuries, but it was definitely a traumatizing experience that nobody should have to go through. This incident certainly demonstrates the work that still needs to be done on our streets as well as the importance and relevance of Vision Zero and its relationship to community driven placemaking and complete streets in San Diego and in other cities.

After seeing firsthand the importance of improving pedestrian safety, the group met at the Copley YMCA with other City officials and partners in the community for a discussion about the Placemaking policy and permit being drafted by the City of San Diego. Our guests from Transportation for America and the National Complete Street Coalition also shared their experience in developing nationwide placemaking and complete street initiatives that achieve numerous benefits for communities including improved pedestrian and bicycle safety. The discussions were in-depth and purposeful as participants possessed a sense of urgency to find innovative and collaborative methods for creating safe, vibrant and creative community-based spaces in San Diego.