When Will Death and Injury on our Streets Promote Real Action?

Abede Kura was crossing El Cajon Boulevard one October evening when he was hit by a car and killed. Wynona Mitchell was crossing Linda Vista Road in September when she was hit by a car in a hit and run. Her body was then hit by two additional cars, neither of which stopped. Michael McGraw was struck and killed while crossing El Cajon Boulevard at 49th Street earlier in the year.

All of these crashes occurred in locations known to be repeat crash intersections: 13 crashes total in the last 15 years among the three intersections.

The Office of the City Auditor released a report last month assessing the City’s programs for pedestrian safety. Among many data points shared was that 60% of crashes involving people walking occur at intersections and more than half of these result in injury and death. Further, approximately 50% of all injury crashes happen at the same locations. 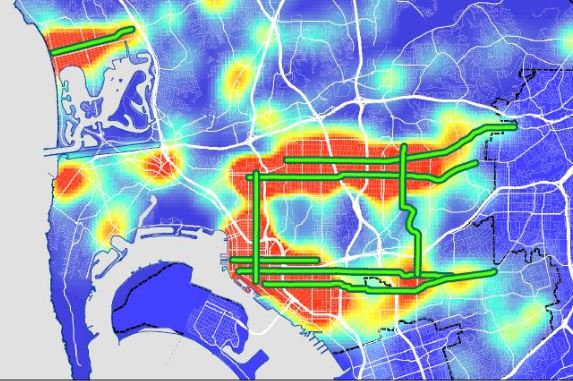 Circulate SD followed up with the Auditor’s office and requested the intersection data points. We wanted to see if they matched up with our Vision Zero corridors. The image above maps the points and powerfully demonstrates the dangers faced by people walking in San Diego.

Many of these intersections have not benefitted from safety infrastructure improvements, even after as many as 18 people were injured in the same location.

One year after a Vision Zero resolution was adopted by San Diego’s City Council, we are still waiting for infrastructure improvements on Vision Zero corridors.

In response to the City Auditor report, staff committed to develop a methodology identifying the most dangerous locations for people walking by December of this year. This is an important step, but clearly much of this data exists. More important is the task of implementing safety solutions on the ground.

This Sunday November 20 is World Day of Remembrance when communities around the country will be commemorating the lives of friends and families lost to traffic crashes. Our hearts are with those in San Diego who have lost loved ones to violence.

These deaths are preventable, but action, including tangible infrastructure improvements, is required. We will continue working hard to promote more action so that more lives are not lost in San Diego to traffic violence.