Jaime Leonen was one of 23 people who died while walking in San Diego last year, and one of 54 people who died in traffic crashes. Circulate San Diego and Vision Zero Coalition partners BikeSD and AARP honored these lives in a press conference Tuesday, February 2 by placing 54 pairs of shoes on the steps of Civic Plaza. The numbers for 2015 represent a 17% increase in deaths for all modes, and a particularly alarming increase of 42% in serious injuries for pedestrians. 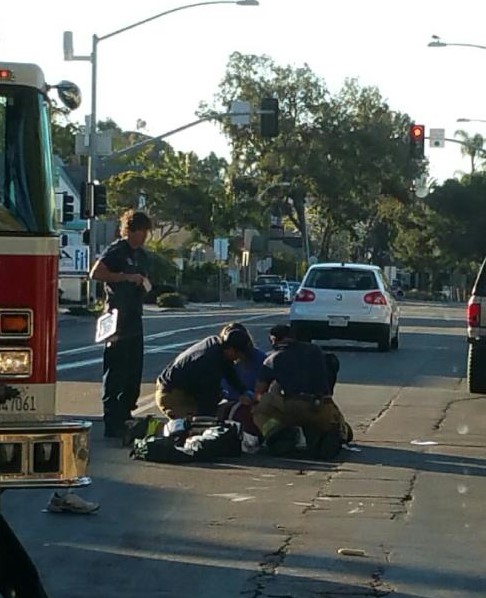 We were honored to have the City Council adopt a resolution last October to support the goal of zero traffic deaths in San Diego by 2025. Since then, Circulate SD has worked with Mayor Faulconer's office and City staff to form a Vision Zero Task Force. Membership on the Task Force involves health professionals, community representatives, business representatives, San Diego Police Department, Transportation and Stormwater staff, and advocates for bicycling and pedestrian safety. The first meeting was convened in January, and the group is creating a 1-year strategy to implement Vision Zero in San Diego.
A draft of the strategy is expected to be completed in April and is organized around engineering of safe streets, education and enforcement.
The timing of this effort is intentional - to coincide with the City's budget cycle to ensure that funds are allocated in the FY2017 budget to implement safety measures that will help save lives in the City.
The increase in death and serious injury on our streets last year shines a light on the need for action. Friends of Jaime's - present at the press conference - remind us that behind every statistic cited, there is a real person with family and friends who suffer loss.
Vision Zero Safety
Do you like this post?
Tweet