Growing Support to Complete the Gap in Hillcrest 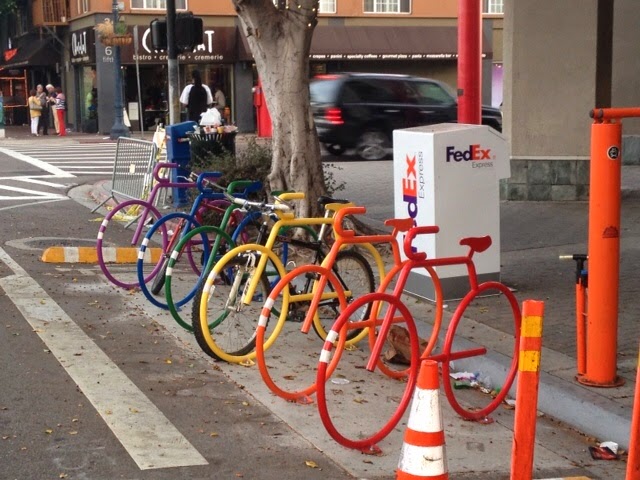 One year ago, 60+ bicycle and community advocates filed into the SANDAG Board Room to pledge support for a proposed protected bikeway on University Avenue in the heart of Hillcrest. Speaker after speaker spoke passionately about their discomfort riding the corridor because of feeling unsafe or a fear to even approach the corridor on a bicycle. A continuous protected bikeway would make them feel safe and encourage more people to bike. Some spoke in opposition to the project but the resounding majority were there to support.

The ultimate vote that day provided only half a solution – a protected bikeway for 9 blocks leaving the rest of the corridor for cyclists to fend for themselves.

Fast forward a year and more and more people are calling to close the gap. In fact, Uptown Planners, the local community planning group, passed a motion last month supporting the construction of a continuous, two-way protected bikeway.

1)   Mid-block crossings should be provided on University Avenue within the 3 blocks east of 10th Avenue.

2)    A two-way cycle track design should be implemented on the north side of University Avenue in consideration of reduced parking impacts and reduced impacts to existing medians.

3)     SANDAG should coordinate their bikeway infrastructure and improvements with the proposed Normal Street Greenway design & provide for neighborhood placemaking throughout Uptown.

4)    Uptown Planners recognizes the safety concerns with no new bike infrastructure proposed along University Avenue from 5th to 10th Ave and requests that a design be proposed for implementation of this section. A two-way cycle track on the north side of University Ave is recommended for minimal impacts to parking.

5)   SANDAG should implement a continuous and physically protected east-west bikeway connection through the entirety of Uptown.

Michael Brennan, a local landscape architect and co-author of the motion says those opposed to the plan couldn’t see any positive at the time. They were pushing back on parking loss, and the potential loss of an I-5 connection in Mission Hills. “The positive aspects of the bike lanes didn’t sink in.”

But conversations around community growth and future mobility have begun to change the dialogue. The planning group has dived deep into its community plan update forcing conversations on how people will get around in the future. Michael Brennan, “As part of this discussion, people have begun to see bicycling in a more positive light, and maybe that bikes are a solution to gridlock.”

For others with Uptown Planners, it’s a more practical point. Uptown Planners Boardmember Gary Bonner says at the time of Transform Hillcrest, they didn’t have all the data on the mobility element of the Community Plan Update to make an informed decision on bike lanes. As a result, they weren’t able to see the big picture. After talks of incoming higher density, there has been more agreement that it would be nice to get bike lanes in first – before the density comes. As a practical point, they believe it’s important to have a continuous east/ west connection.

Other factors are also at play. After the June decision, SANDAG began working with the community to identify parking offsets (new parking spots to replace those lost with implementation of the plan) and other traffic calming/ neighborhood beautification measures. Proposed improvements became more tangible and resonated with community leaders.

How to Close the Gap

With support for a continuous bikeway on University Avenue, what is next step to move to design and construction? SANDAG seems to be standing by its decision to construct the partial protected bikeway. That means responsibility for constructing additional bikeway mileage likely falls on the City.

The good news? The City is already planning to rip up University Avenue to install a new sewer line. As part of the Mayor’s One Dig initiative as well as Vision Zero, a new bike lane can and should be integrated into the efforts.

The bad news? The City does not yet have a proposed design to close the gap, and this is needed to garner additional community support and make the concept reality. There are many ideas the City can work from including SANDAG’s original concept, Transforming Hillcrest, and now ideas from Uptown Planners.  Let’s work together to encourage the City to design this critical piece and close the gap.

We will be working with community leaders, Bike SD, and the San Diego County Bicycle Coalition in upcoming months to make this happen.