SANDAG is currently preparing a ballot measure for the November 2016 election to fund a variety of transportation, habitat, and infrastructure programs.

These amendments provide greater clarity about SANDAG’s plans, and they demonstrate commitments for at least some timelines for some transit projects.

Circulate San Diego will continue to monitor the progress of SANDAG's ballot measure, and advocate for more funding and certainty for transit and active transportation.

E.  Excess toll revenues from Managed Lanes as permitted in California Streets & Highways Code sections 103, 149.4, or other statutes authorizing the collection of tolls on Managed Lanes by SANDAG, shall be used for transit service improvements within the effected corridor, including safe routes to transit projects, in accordance with such laws.

B. This Program is intended to provide funding for bikeway facilities and connectivity improvements, pedestrian and walkable community projects, bicycle and pedestrian safety projects and programs, pedestrian grade separation projects, and traffic calming projects. The funds in this Program will be distributed each year. A variable portion of these funds shall be allocated on a regional competitive grant basis by the Commission through periodic calls for projects, with the remaining funds being allocated to other uses in the Active Transportation Projects Program. It is intended that these funds be used to match federal, state, local, and private funding to maximize the number of improvements to be implemented. The Commission shall establish specific project eligibility criteria for the competitive grant program.

D. A minimum of 1.95 percent of Net Revenues will be made available during the life of the Ordinance to the Metropolitan Transit System to operate the Trolley System at increased frequencies as described in the Expenditure Plan. The Trolley and COASTER services to be increased with the funding from this subprogram include those set forth in the attachment to this Ordinance entitled “Trolley/COASTER Systems Service Increased Frequency and Capacity.” With the exception of the Orange Line extra peak period trains, all Trolley and COASTER frequencies listed in the attachment would be implemented in April 2017 (COASTER) and June 2017 (Trolley) in alignment with the regular operational adjustment cycle for the COASTER and Trolley systems. The new Orange Line peak period trains, which will require new vehicles, will be implemented following an estimated two-year period from the operative date of the Ordinance to allow time for the procurement process and coordinate the procurement with other ongoing transit capital projects. The new AMTRAK Rail2Rail service is anticipated to be implemented by October 2017, pending approval by the LOSSAN Rail Corridor Agency and coordination of the start-up of service during the regular operational adjustment cycle for the LOSSAN/COASTER rail systems. 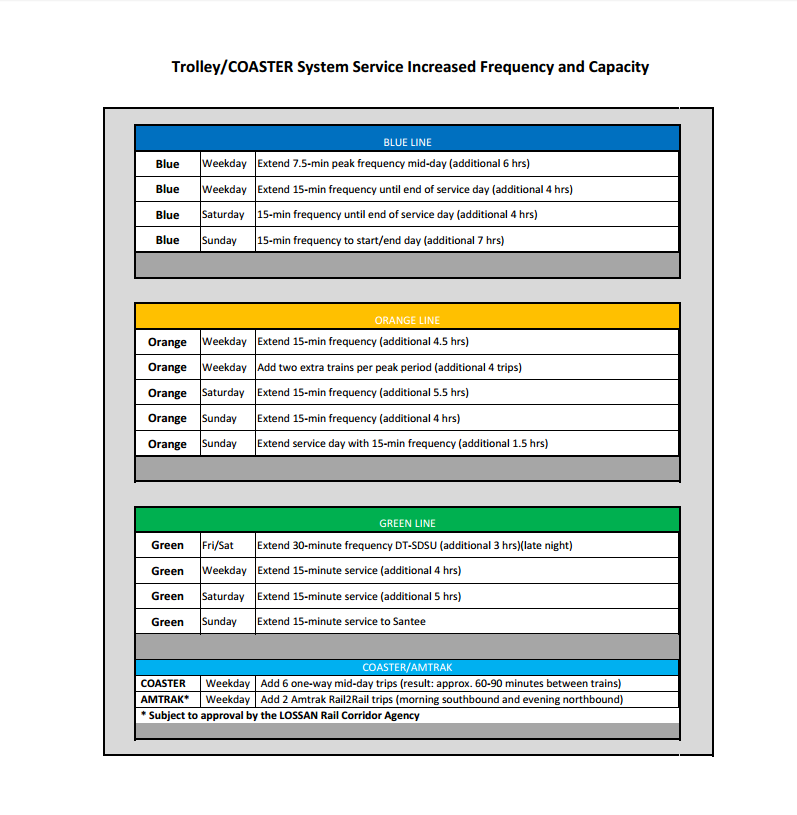