Below is a summary of some of our programs that have made a great impact on communities across the San Diego region this past year (2017-2018): 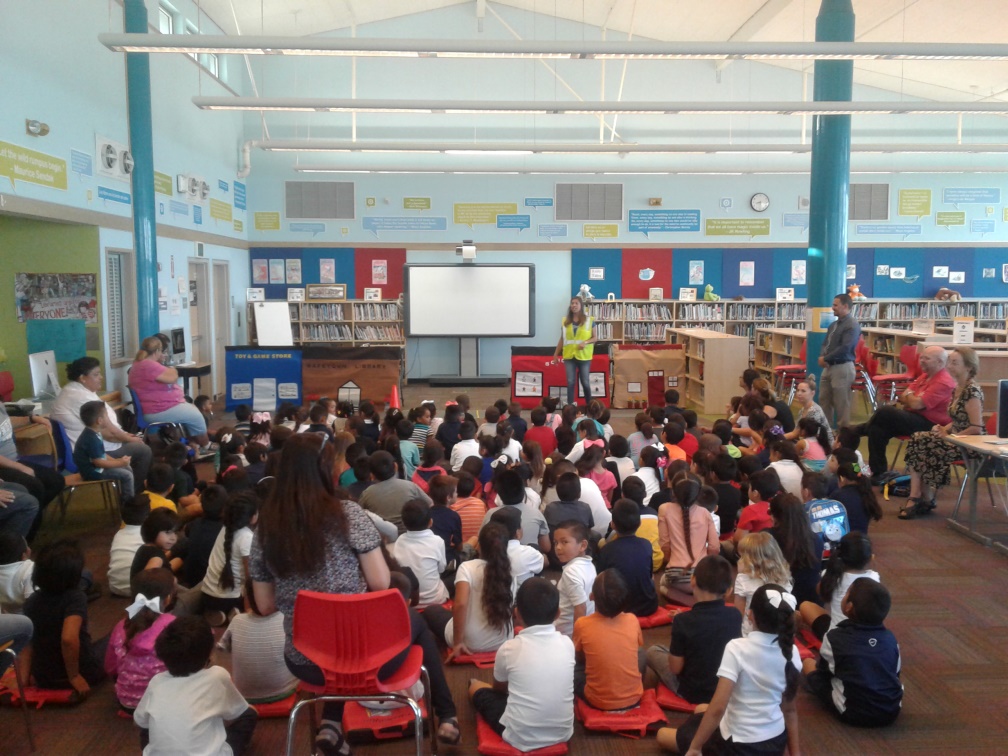 During the 2017-2018 school year, Circulate San Diego staff reached 1,790 students during Walk This Way presentations as part of our Safe Routes to School education.  We presented to 7 different schools predominantly in San Diego Unified School District, selected for their proximity to Vision Zero corridors and the Fatal 15 intersections, which are corridors and intersections with the highest pedestrian/car crash counts resulting in fatalities.  The presentation taught students how to be safe on the street through a 5-step lesson for crossing intersections safely.  Students were selected to come to the front to practice the 5-steps to support kinesthetic learning.

The Vision Zero approach aims to have zero pedestrian deaths by 2025 in the City of San Diego.  Education to population groups closest to these dangerous corridors and intersections is important to fulfill that mission. In addition, our goal is to encourage active forms of transportation (walking and cycling), in an effort to reduce childhood obesity, car congestion/stress around schools, and to improve the air-quality. 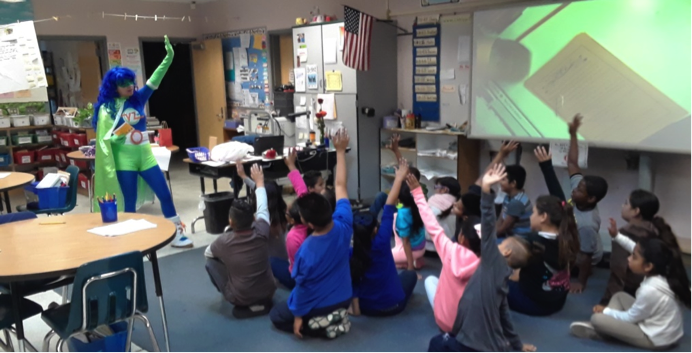 The Captain VZ female superhero is a Circulate San Diego original, developed to provide fun and pedestrian safety education for residents and students in particular. During the 2017-2018 school year, we reached 1,617 students, and are scheduled to present to 350 students during summer school for 2018.  Similar to Walk This Way presentations, we presented to schools near Vision Zero corridors and the Fatal 15 intersections (e.g. Imperial Avenue corridor near Sherman Heights and Logan Heights). Students left the presentation excited to practice their 5-steps, and encourage others to do the same. Additionally, Captain VZ served to get students excited for Walk to School Days and Walking School Bus scheduled events at their schools, resulting in high participation rates for the events. 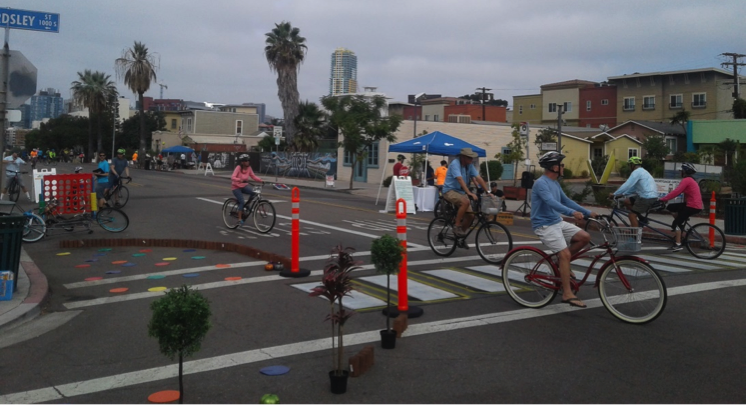 On October 29, 2017, several blocks in Downtown San Diego were closed off to cars, from Little Italy in the north to Barrio Logan in the southeast. Over 10,000 San Diego community members and visitors had the opportunity to walk, run, and ride in a car-free, care-free space for active transportation and recreation purposes. Spaces along the route were activated to encourage placemaking and celebration, including Circulate San Diego’s pop-up traffic calming demonstration and placemaking. Circulate staff was there to discuss how bulb-outs, artistic crosswalks, and placemaking help reduce car speeds, which in return help save lives, too. To activate our space, we brought out several extra-large games like Jenga and Connect-Four to engage those passing by. In addition to games and the pop-up demonstration, we collected 300 surveys during this open street event. 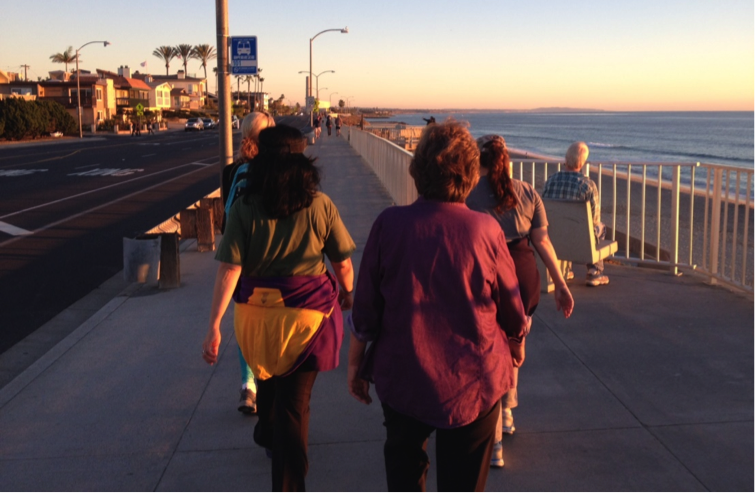 Circulate San Diego has led several Walk+Bike programs over the years, including our most recent on one in the City of Carlsbad. In the last year, Circulate provided support to the City of Carlsbad’s Walk+Bike program by leading walks within the city’s boundaries. The effort was done to encourage community members and visitors to learn about the City’s trail connections (both urban and natural), and to foster an active lifestyle. In addition, these walks served as informal walk audits to review existing infrastructure for pedestrians; this information was then relayed to Carlsbad’s city staff to help them improve the infrastructure.

Circulate San Diego used Meetup.com to advertise the organized walks and maintain a followership that has now reached over 1,500 members. Approximately 240 people attended 15 organized walks between July 2017 and June 2018. These walks additionally proved to be an opportunity for community building and to encourage healthy lifestyles outside: a breath of fresh air during a stressful week.

One of the walker’s testimonial illustrates the benefits of this endeavor for a community:

“I just want to let you know that I love this activity. It gives me the opportunity to explore areas that I am not familiar with and meet people that I would otherwise not get to know. Thank you so much for doing this. I forward your emails to my friends and talk about the group with anyone who will listen. Thank you again and I love the motivation it gives me to get out and walk!” (Mary Amari, Carlsbad Walks Group Member) 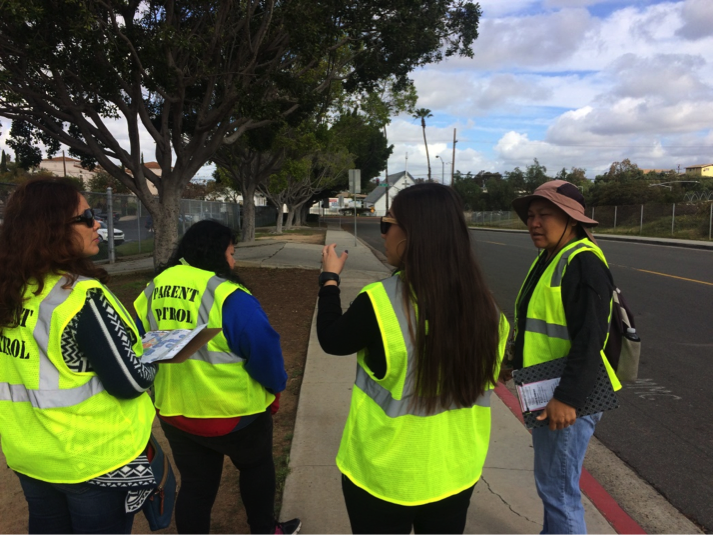 Circulate San Diego joined the City of National City and the National School District in a partnership to support safer access and active transportation to school. Between January and March of 2017, Circulate staff worked with 10 project schools as part of a Safe Routes To School (SRTS) program implemented in collaboration with Rady Children’s Hospital. In total, 66 parents participated in the walk audits along with Circulate San Diego and Rady Children’s Hospital; as a result of the observations made, a detailed map of opportunities and a table of issues with recommendations was created for each of the participating schools. Particular attention was made to the existing infrastructure, signage, and crosswalks conditions, in order to pass on the collected observations to City of National City for their review. The City plans to use the collected feedback and recommendations to prioritize planned improvements for infrastructure, signage, and crosswalks to improve SRTS for their community. 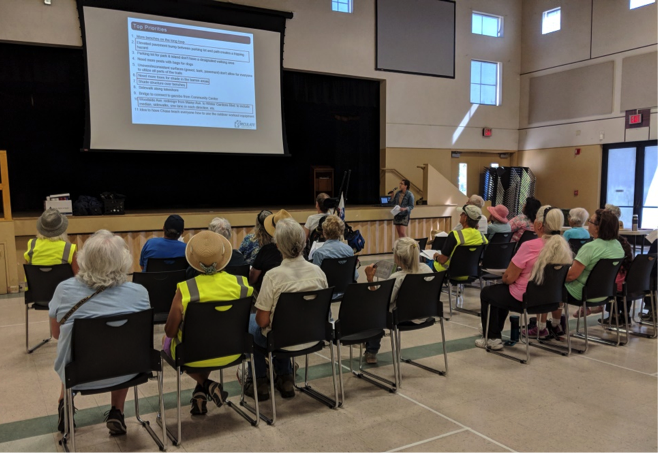 Peer Empowerment Program 4 Physical Activity (PEP4PA) is a program through UCSD’s Department of Family Medicine & Public Health. Circulate San Diego teamed up with PEP4PA on this project that aims to improve walking conditions for older residents of San Diego County. Between January 2016 and June 2018, approximately 100 seniors attended one of six training workshops in various sites, including Spring Valley, Lakeside, and Southeast San Diego. Trainings were aimed at empowering older adults to advocate for improved walking conditions around their buildings and in their communities. Circulate San Diego staff facilitated 2 sessions for each of the 6 intervention sites, detailed below:

Session 1 (90 minutes) – Training and Discussion: Identifying key ingredients to walkable neighborhoods, Best practices around building Complete Streets and improving walkability through advocacy at the local and regional level. Attendees also participated in a demonstration walk audit to learn how to identify barriers to walkability.

As a result of those two workshops, a list was compiled of prime opportunities to support walkable streets, such as:

After our workshops have been conducted, residents will work with PEP4PA to take action on the top priority issues they identified. Circulate looks forward to learning about their progress and supporting their effort