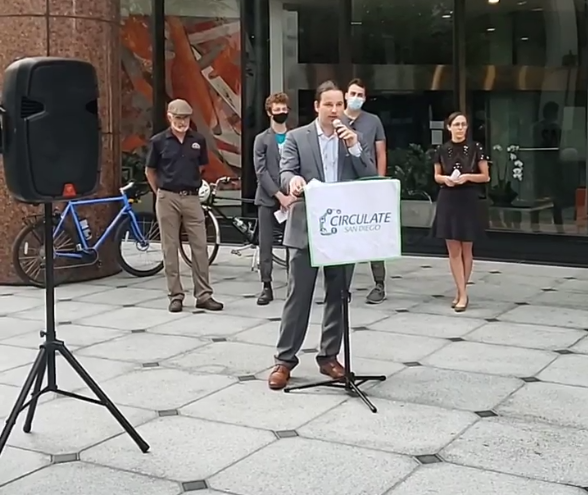 On September 24, Circulate San Diego hosted a press conference outside of the offices of the San Diego Association of Governments (SANDAG) to call on SANDAG to speed the implementation of its Regional Bicycle Early Action Program. Representatives from Circulate San Diego, Climate Action Campaign, and the San Diego Bicycle Coalition spoke in support of these changes.

The Board of Directors of SANDAG unanimously voted today to dedicate additional funding for the Regional Bike Early Action Program. At the same time, the Board approved San Diego Mayor Todd Gloria’s motion directing staff to return to the Board before the end of the year with recommendations for process improvements to shorten SANDAG bicycle project timelines. In recent weeks, advocates have voiced concerns about delays in SANDAG bicycle projects.

SANDAG is responsible for regional transportation planning for San Diego County, and adopted a $200 million Regional Bike Plan Early Action Program in 2013. Significant media coverage illustrates how SANDAG spends large amounts of funding on planning efforts, with too few bicycle lane miles to show for it.

“At least fourteen bicyclists have been killed just this year while riding in San Diego County”, said Jesse O’Sullivan, policy counsel at Circulate San Diego. “The SANDAG Board’s action to increase bicycle project funding and find ways to speed the process is an important step to preventing more deaths.”

In response to these deaths, Mayor Todd Gloria announced yesterday that the City of San Diego will be quickly installing a temporary bikeway on Pershing Drive, which will be in use until SANDAG begins construction next year. Circulate San Diego strongly supports this bold interim action from Mayor Gloria to keep bicyclists and scooter riders safe.

The changes requested by advocates are outlined in a coalition letter signed by Circulate San Diego, Climate Action Campaign, and the San Diego County Bicycle Coalition. The letter urges SANDAG to make sure that bicycle lane projects are built a reasonable time frame, and to design projects in a cost-efficient manner so that more miles of bikeways can be built.