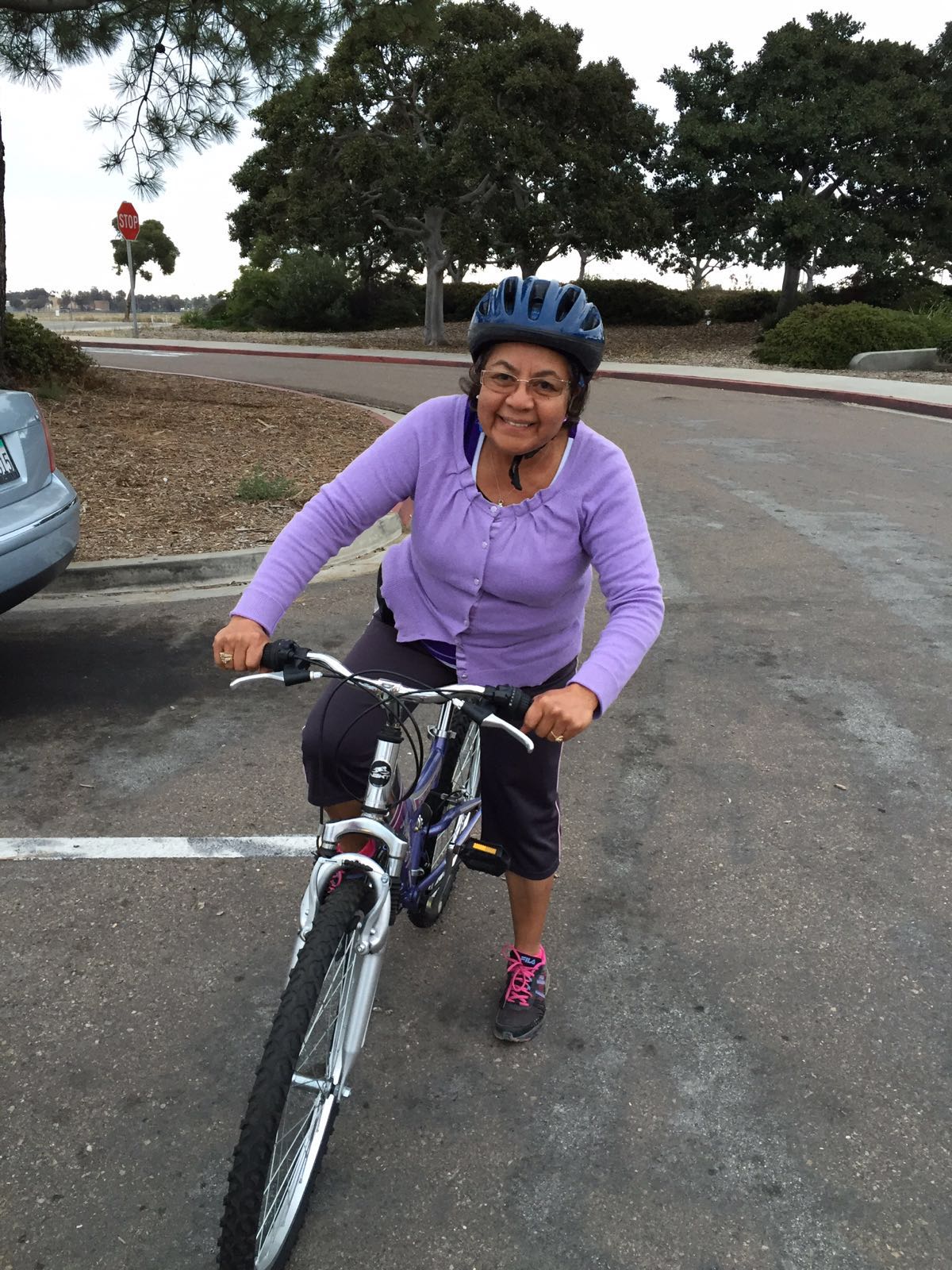 The City of Chula Vista’s Recreation Department, together with local non-profits Circulate San Diego and the San Diego County Bicycle Coalition, started a new campaign designed to promote and encourage walking and biking throughout the City. The program already hosted 5 Meet-Up walks around Recreation Centers and neighborhoods, 2 Meet-Up bike rides around parks, and 1 “Bike and Learn Together” ride originating from Parkway Community Center. Circulate Staff conducted five “Walk This Way” pedestrian education sessions for participants of Recreation Department camps. More events and activities are forthcoming and posted on a monthly basis. For more information, please visit the website at http://www.chulavistaca.gov/walkbike

During one of these events, Crecencia Garibo shared her story. Over Crecencia’s lifetime, she tried to learn how to ride a bicycle.

Everything started, as she remembers, when she was a little kid. Crecencia’s family could not afford to buy her a bicycle. Although her brothers had a bicycle, which they used as transportation means, she was never allowed to use a boy’s bicycle. As time passed, she did not have the opportunity to learn. After many years, when Crecencia moved to the United States, she decided she would ride a bike.

The first time, after not been able to balance, Crecencia gave up feeling that she would not be able to ride a bicycle. The second time, being over 50, Crecencia told her son her desire to learn. Her son bought a bicycle and started teaching her.

After Crecencia fell off the bicycle her son, Mario, did not want to see his mother falling again and convinced her to stop pursuing that dream. Finally, at age 62, Crecencia was ready for a third chance and she was not really aware, things just happened.

One day talking with some co-workers she expressed her dream/desire to learn to ride a bike. During such conversation, she was advised to go to a YMCA, they could provide a class. For few days she was still thinking about it when her co-worker, Jorge, surprised her by buying her a used bike at the Goodwill to motivate her and convince her she could do it. At the YMCA she was recommended to contact the San Diego County Bicycle Coalition and she did.

“After about five lessons, I was able to pedal the bike for a short distance,” Crecencia says, “The feelings I had when I began to actually ride were very emotional. I could not believe I was actually riding a bike.  It is a wonderful feeling. I can now cross this off my bucket list since I feel so satisfied and happy as I ride my bike around my neighborhood, it is a wonderful feeling”.  She feels that she still needs to work on control and practice her skills more, but is now riding.

“So far my longest ride has been three miles”, says Crecencia with pride. She has even participated in her first group-ride, but feels that she still needs to practice in order to be at the same level of the other riders. “It was a different feeling than when I ride by myself, I would like to ride more and hope to do so in the future”.

Now, you can find Crecencia riding on a bike path located on J Street close to the Chula Vista Marina or near the Health Department in Chula Vista where she likes to practice.