The Regional Walk Scorecard measures how San Diego's regional cities are doing to respond to the call for more walkable neighborhoods. 2013 rankings and scores are listed below. Click here to view a summary for each city. 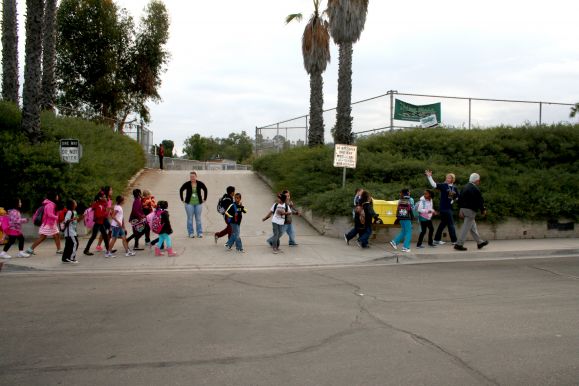 La Mesa emerged as the top scoring city for several reasons. The city has (a) extensively catalogued local walking conditions, especially around transit stations and schools, (b) consistently upgraded intersections and other facilities to better alert drivers to the presence of pedestrians, (c) instituted a host of incentives to reward developers for designing buildings and neighborhoods with walking utmost in mind, especially in their downtown and transit station areas, and (d) instituted a robust program to educate students and families about pedestrian and bike safety and encourage them to walk and bike to school. In addition, La Mesa has protected its downtown grid network of streets, which allows for a mix of walkable destinations, including transit stops.

National City came in a close second. Our top scoring city last year, National City continues to aggressively add pedestrian-friendly facilities and amenities throughout the city. Like La Mesa, National City has extensively inventoried the walkability of streets and neighborhoods to identify areas needing improvement. Ironically, National City has the highest rate of pedestrian collisions in the region, but overcomes this negative with the high number of residents who walk or use transit to get around.

Imperial Beach moved up from fourth to third place in this year’s ranking. This city is like the Little Engine that Could. It has quietly added numerous traffic calming installations and pedestrian enhancements throughout the city. One result is the remarkable increase in residential, shopping, and visitor amenities on or near Seacoast Drive, its cozy “Main Street.” Visit this area soon to see how increased pedestrian comfort and convenience can turn a place around.

The two cities that scored lowest in the 2012 report—Santee and El Cajon—continue to hold those rankings. Whereas these cities received higher marks this year for walkability improvements and pedestrian safety education programs, other cities simply outpaced them. In addition, Santee and El Cajon have not updated the policies analyzed for the Scorecard, such as Complete Streets and Transit Oriented Design policies. This is not to say there are no such policies – indeed, both have focused on increasing walking, bike safety, traffic calming, and transit use in key areas such as residential neighborhoods, Main Street corridors, and trolley stations. However, their policies lack the strong language and incentives we found in the other cities.