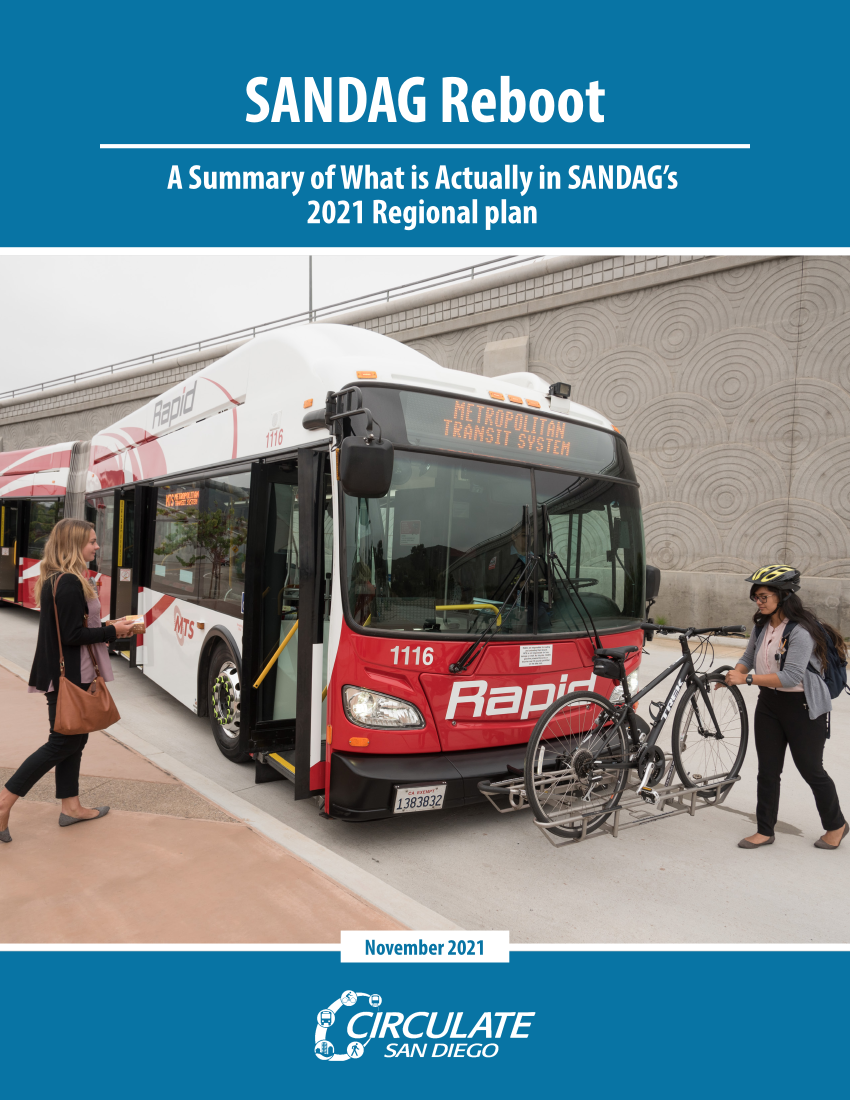 Circulate published a report titled “SANDAG Reboot” earlier this year that summarizes the important elements for what was actually in SANDAG’s initial Draft Plan.

In the short term, both plans implement significant frequency improvements to bus and rail service, and a system of RAPID busses. Frequency improvements and bus rapid transit are two of the most cost-effective ways of increasing transit ridership. Because of revenue structure changes, these improvements may come even sooner in the Proposed Final Plan.

Both Plans also include speculative revenues in the later years of the plan, which may jeopardize SANDAG’s ability to deliver on what it promises.

The Board will vote on December 10 whether to approve that plan.

While circulate was unable to provide the same level of detail as it did to compare the 2015 Plan with the Draft 2021 Plan, we did undertake a comparison of the broad revenue and spending categories contained in the Draft and Proposed Final 2021 Plans. That comparison is available here as an Excel spreadsheet [Excel].

The Proposed Final plan revises upward estimates for matching funds from the state and federal governments, based on moving up the first SANDAG ballot measure and the creation of a second SANDAG ballot measure. These funds are contained within the RMRA and Federal Transit Administration Discretionary categories.

Moving ballot measure up and bonding against that new local funding would allow more spending in earlier phases of the plan. This earlier spending may allow SANDAG to deliver transit projects and service sooner. The Proposed Final Plan spends $4.6 billion on transit in the 2021-2025 Phase, where the Draft Plan spent $2.9 billion. The Proposed Final Plan also spends more in the 2026-2035 phase, and then less in the 2036-2050 phase, such that the overall cost is similar.

The Proposed Final Plan revises downwards highway operations and maintenance costs from $13.5 billion to $6.5 billion. SANDAG staff represented to Circulate that this is based on changing estimates obtained by SANDAG from CalTrans. The Proposed Final Plan increases funding for managed lanes and managed lane connectors in the 2021-2025 Phase of the plan, while eliminating funding for highway connectors.

The proposed final plan also includes $8.3 billion in spending on debt service, where the Draft Plan included only $4.9 billion. This is because of bonding against the additional anticipated ballot measure revenue. In addition, the Proposed Final Plan includes slightly increased funding for Supporting Programs and Policies.

In general, the major projects in the plan remain relatively unchanged, though some may be anticipated to come online sooner. The Purple Line, the Airport Connector, the Central Mobility Hub, have identical funding allocated in the Final Plan as in the Draft Plan.

In addition, Regional Bicycle Network maps appear to be identical.