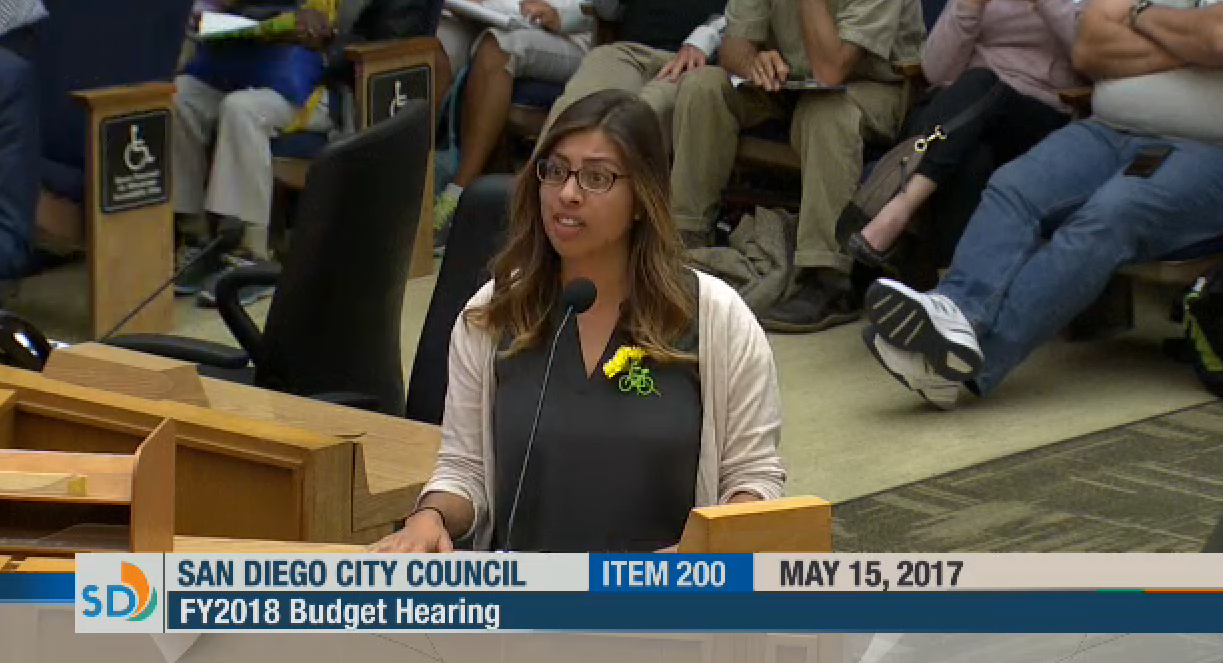 Vision Zero encourages cities to take a data-driven approach to reducing serious injuries and traffic deaths. It is meant to be a catalyst for moving projects forward. However, it is the people who advocate for this initiative that truly build the urgency for action.

The Vision Zero Coalition is a group of advocates that are representatives of organizations throughout San Diego. Together with constituents of their community, they work towards increasing street safety by focusing on moving projects forward that protect pedestrians, bicyclists, and motorist. They also work to inform residents about Vision Zero and to build momentum around critical events that can lead to long-term change, such as the City’s budget approval.

Addressing fatalities means investing in upgrading city streets to incorporate improvements that create a safe space for people who walk, bike, take public transit and drive. The City’s Fiscal Year Budget is an opportunity to fund projects, programs, and prioritize initiatives throughout San Diego. Advocating that the budget reflect funding for projects envisioned by Vision Zero is a key component of assuring that our city is investing in our safety.

Every year San Diego releases a proposed budget for the following fiscal year and city council members hold a meeting to listen to public opinions about the budget. This offers the public an opportunity to voice their support for both projects that are funded and those that are not. However, deciphering the budget can be intimidating and overwhelming. In order to address this issue, advocates from the Coalition came together to break down the budget components and rally community members.

This year, Circulate San Diego partnered with Bike SD, the Climate Action Campaign, and the San Diego County Bicycle Coalition to hold the rally and build support for pedestrian and bicycle improvements. At the gathering, people spoke about the different projects reflected in the budget that needed public support. Attendees were invited to attend the public council budget hearing meeting and were helped with speaking points that could be used to build their own testimonies.

Advocates from various neighborhoods came together at the budget hearing meeting to voice their support for pedestrians and bicycle safety improvement. The City responded by approving funding for several projects listed below.

Although these successes are a reflection of the City investing in street improvements, more support can be given to Vision Zero projects. Indicating that more work is ahead for advocates as we work towards building safer streets in our city. However, it is clear that by voicing our support for Vision Zero, we can have an impact.