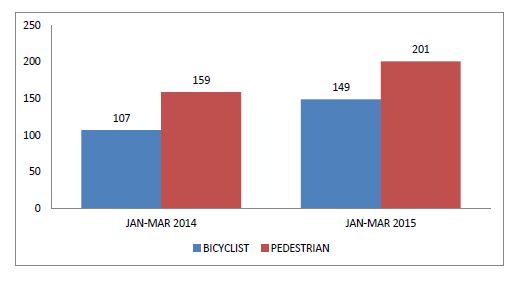 Injuries on the Rise
Recent data from the Police Department shows that collisions for people walking and biking in the City have increased almost 30%. Collisions resulting in injury have increase 32%.

These deaths and injuries are preventable. In June, San Diego Mayor Kevin Faulconer, Mayor Pro Tem Marti Emerald, Councilmember Mark Kersey, Police Chief Shelley Zimmerman, and others announced their support for Vision Zero. At the heart of Vision Zero is the belief that death and injury on city streets is unacceptable, and more importantly, is preventable.

The support of San Diego's civic leaders is an important first step: this work could not be done without the leadership and support that Mayor Faulconer and Councilmembers Emerald, Kersey, and others have shown. However, without action their support will not stop the daily carnage on our streets.

As detailed in our Vision Zero white paper, one person is seriously injured or killed while walking, biking, or driving in the City of San Diego. That means on average, 25 people have died or been seriously injured getting from point A to B in San Diego since our leadership voiced their support for ending all traffic deaths.

Next Steps
After an August recess, the City's Infrastructure Committee will review a Vision Zero resolution in their September meeting. The resolution will recognize the problem of traffic deaths and form an advisory committee to create a strategy to eliminate traffic deaths in 10 years. Getting the resolution passed from the Infrastructure Committee to the City Council is the crucial next step to make Vision Zero a reality.