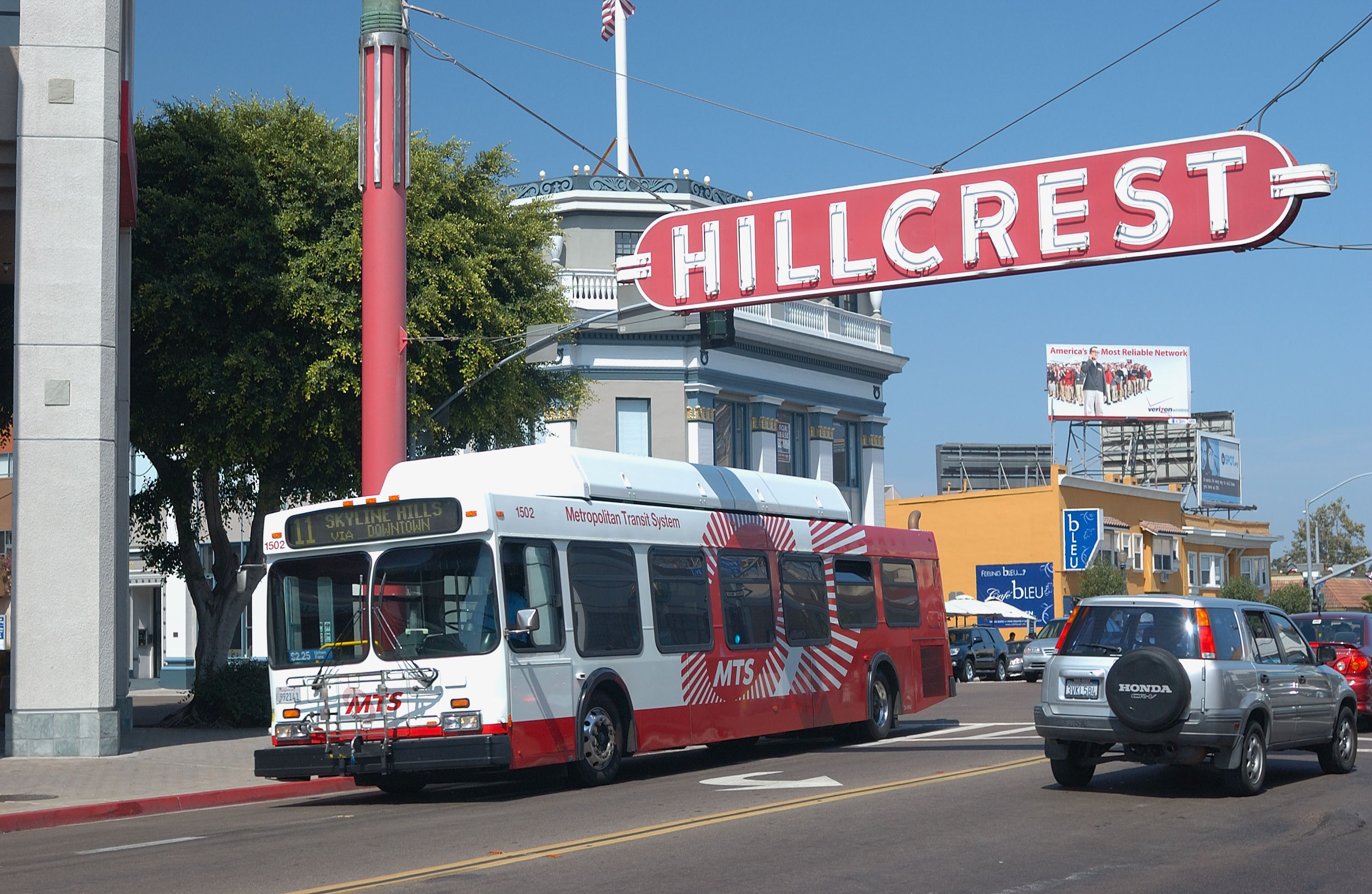 The two TransNet measures already adopted by voters each identify a variety of projects, uses for funds, and provisions for expenditures. They are actual ordinances adopted by the voters, with the force of law, detailing what projects SANDAG must build, and how.

A new Quality of Life measure could identify specific transit or other projects, and require that SANDAG prioritize funding and construction of them, before others.

The TransNet Extension Ordinance does not have specific deadlines by which individual projects must be completed. Given the competitive process by which state and federal funds are awarded to regions, it may be ungainly to require date-certain construction deadlines through a voter approved measure. However, a creative draftsperson could easily craft terms for the new Quality of Life ordinance to require that certain projects take precedence when using new taxpayer revenue.

Transportation projects are large, expensive, and they take time to both build and finance. Fortunately, like individual families buying a house, public agencies don’t have to pay all of a project’s upfront costs.  Instead, projects can be financed with debt, bonded against future revenues.

SANDAG already financed over $1.5 billion of transportation investments with a variety of bonds based on future TransNet revenues. SANDAG staff has stated that their bonding capacity–not their legal capacity, but the capacity for which the bond market will continue to issue SANDAG debt–is almost at an end. Without additional revenues, future TransNet expenditures will be on “pay as you go” model.  A graphic outlining this funding is below. 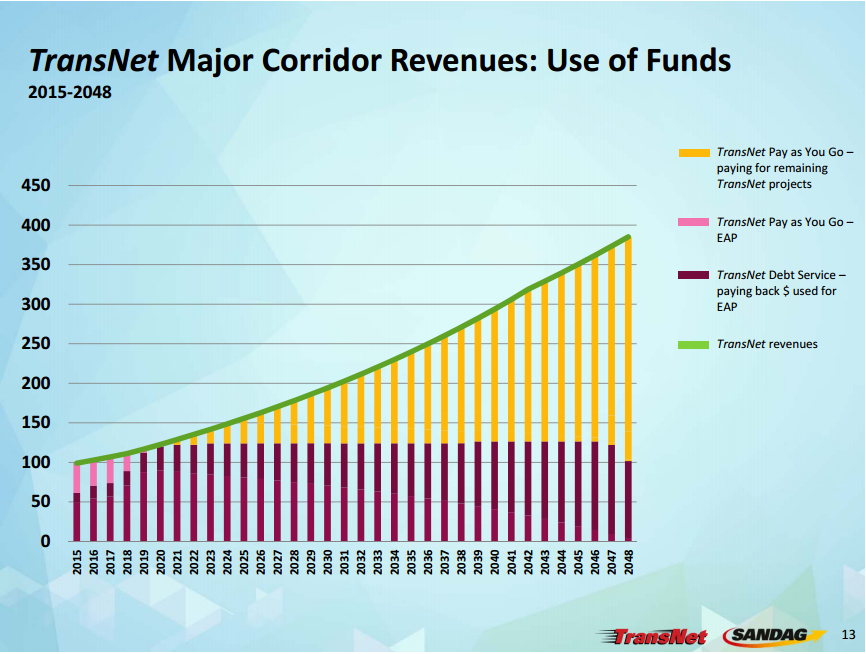 SANDAG assumes new Quality of Life revenue in its 2015 Regional Plan to pay for transit operations. That assumption is sufficient to satisfy federal rules on regional transportation planning, but insufficient for Wall Street to float additional loans to SANDAG.

However, if that additional revenue became a reality, not just a projection on SANDAG’s plans, then the bond markets would allow SANDAG to borrow more near-term capital to accelerate projects.

It is important to appreciate that bonding against new revenue would allow SANDAG to advance transit projects, even if the new revenue was not in excess of the amount planned for transit in their 2015 Regional Plan. SANDAG is planning to use “pay as you go” TransNet funds to construct projects through 2048. With new revenues coming in earlier, SANDAG could use that new guaranteed income to issue bonds and build projects earlier, and then use ongoing revenues to pay off those bonds, instead of to build projects slowly on a “pay as you go” basis.

As we discuss below, another way to accelerate transit projects is to repurpose funds already programmed for highways to fund transit. But the added bonding capacity would allow for SANDAG to accelerate transit, without having to cannibalize projects the voters have already chosen to fund.

One way to accelerate transit is to repurpose funds that SANDAG plans to use for highways, into transit projects.

It should be noted that Circulate San Diego has not advocated for moving funds approved by voters to fund highways, into funding transit. Our approach has been to focus on what we want–transit and active transportation–not on things we may not like, like freeway expansions. This section is only included to help explain the mechanics of how such a process would work.

SANDAG has been unwilling to move funds from highways into transit projects, in large part because the TransNet measures voters approved require the construction of those highways. Voters are unlikely to reward SANDAG with more tax revenue, if they feel like SANDAG is not building the projects the voters approve.

Quality of Life could present an opportunity for voters to approve a new set of projects that SANDAG is compelled to build. If there are highway projects that the region no longer supports, SANDAG could develop a Quality of Life measure that allows voters to remove, or even just amend those projects. There are a variety of projects TransNet is obligated to build, from which funds could conceptually be repurposed. A graphic listing these projects is presented below. 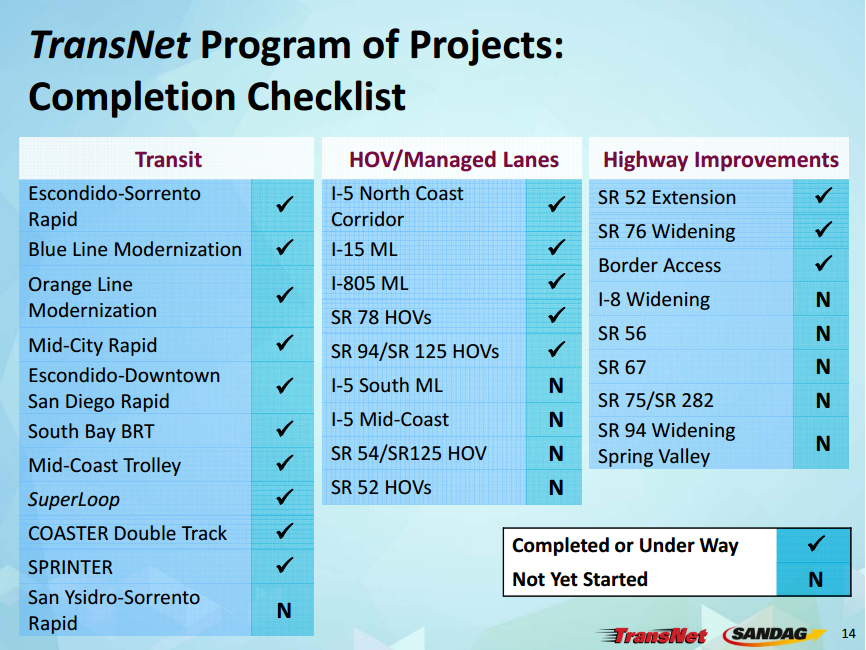 Suffice it to say, removing highway projects from the TransNet Ordinance is a politically more difficult method to advance transit than the others described above. The other options assume growing the transportation funding pie, and using some of the new revenue for transit advancement. Repurposing TransNet funds is more of a zero sum game, and that may bring fierce opposition from interests that support highway expansions.