Circulate San Diego launched #VisionZero last year with significant help from supportive community organizations. Of the 8 corridors identified as high priorities in the campaign, University Avenue was at the top of the list. Why? Because 30% of the City’s pedestrian crashes in the last 15 years occurred somewhere along this corridor.

Since then, City staff determined the ½ mile section of University Avenue - between Fairmount and Euclid Avenues - was the most problematic with the highest number of crashes. Senior traffic engineer Julio Fuentes and his staff member Phil Rust, in partnership with the offices of Mayor Faulconer and Councilwoman Marti Emerald, responded by organizing a University Avenue Working Group with the mission to “Improve safety for all modes as part of Vision Zero.” 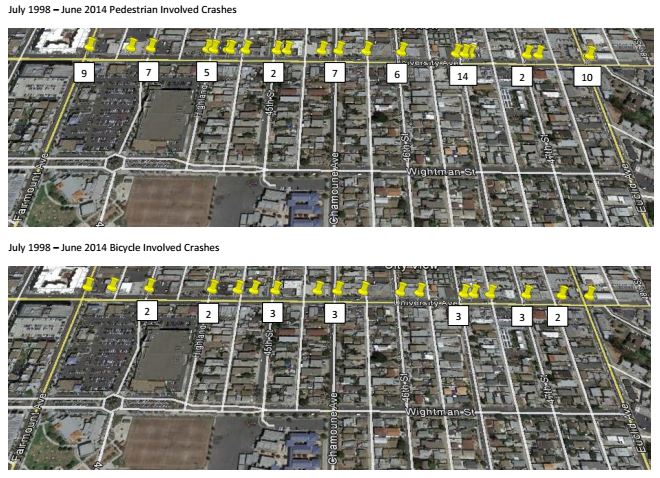 The Working Group is comprised of community members, leaders from the City Heights Area Planning Committee, business owners, and nonprofit organizations active in the community. The Working Group has convened four times and with each meeting, discussed the safety problems and potential engineering solutions.

Whereas the City has often put together ‘Steering Committees’ for transportation or land use projects to help guide decision making, this effort is different because it has taken a step by step approach – working with community members along the way - to clearly understand the problem and determine a solution. There has been ample time for working group members to ask questions and discuss. And staff is leading the effort, in lieu of a consulting team. This change has provided more room for direct discussion with staff which has been very helpful.

The first community workshop will occur in mid-April to obtain additional community input.

In short, the effort has been a tremendous success. As Circulate San Diego and its partners work with the City to develop a one year Vision Zero strategy for 2016/2017, we want to see more working groups established: work is needed to extend the traffic calming concepts proposed for University Avenue beyond the study section where many crashes have also occurred, and to take the successful Vision Zero Corridor model to a new corridor, preferably Market Street where complete streets components were included in the community plan update adopted last year, but implementation has not yet started.

Image above: Data shared with Working Group for pedestrian and bicycle involved crashes for 1/2 mile section of University Ave.