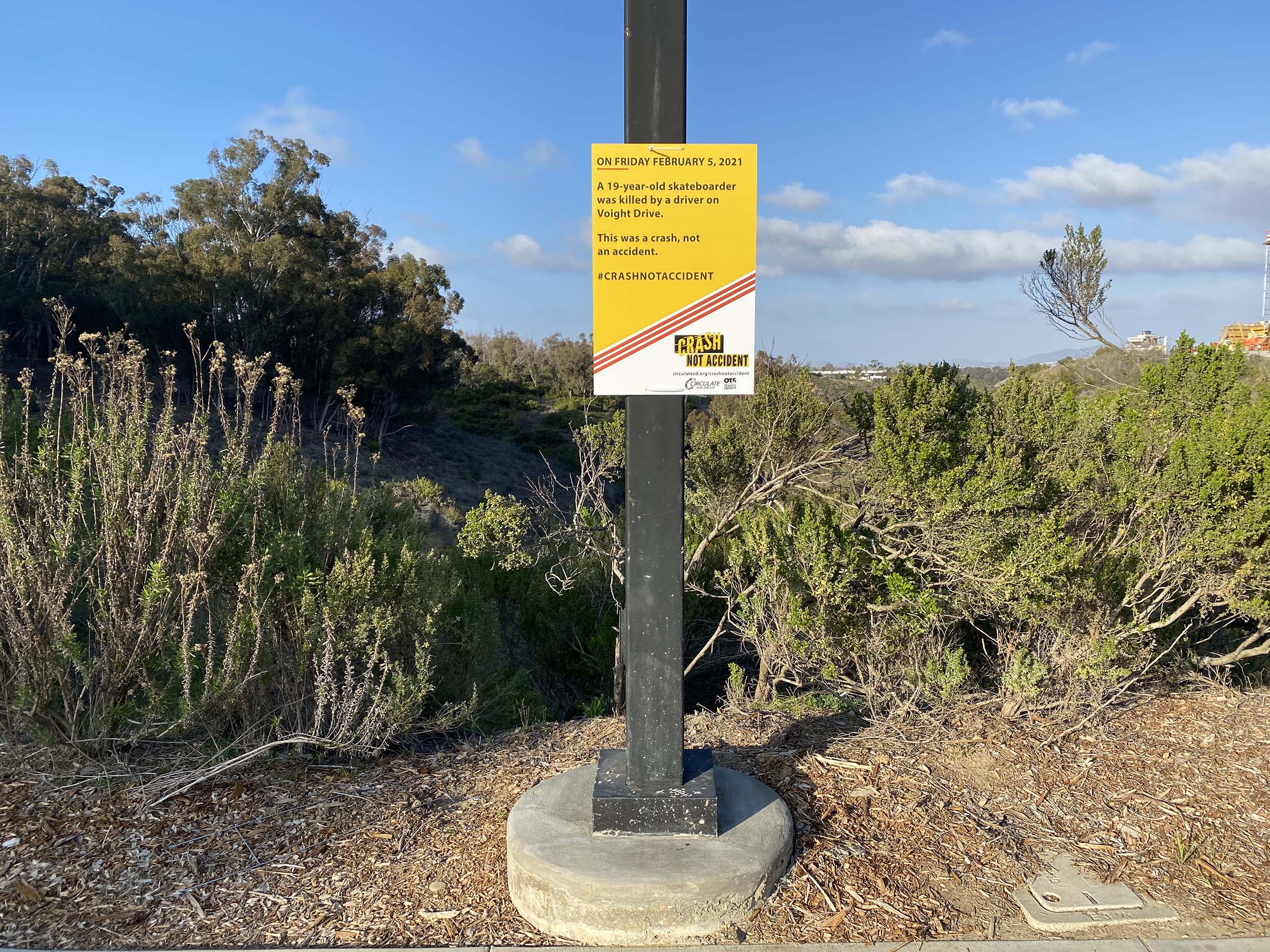 SAN DIEGO (February 10, 2021) – A 19-year-old skateboarder was hit and killed on Friday, February 5, 2021 while riding on Voight Drive on the UCSD campus. According to the San Diego Police Department’s Watch Commander’s Log, at around 11:30pm, the victim was skating westbound on Voight Drive when they lost control and fell from the skateboard. Some time later, a driver ran over the skateboarder while he was still lying in the middle of the roadway.


"No loss of life is acceptable on San Diego’s streets," said Colin Parent, Executive Director and General Counsel for Circulate San Diego. “We say “crash” and not “accident” because this death was preventable. Drivers need to be more alert and aware of the other road users, such as skateboarders, bicyclists, and pedestrians.”

Circulate San Diego currently leads Crash Not Accident and Vision Zero campaigns, which are both efforts to end traffic deaths and serious injuries on San Diego streets.  As a part of that campaign, Circulate will be displaying the attached placard at the location of the crash.

In partnership with the California Office of Traffic Safety, Crash Not Accident educates San Diegans about our role in preventing traffic deaths and serious injuries by acknowledging that crashes are not merely “accidents,” but are the result of human error and systemic decisions. For more information, visit http://www.circulatesd.org/crashnotaccident.

Vision Zero is an international movement to end traffic deaths and serious injuries through careful driving, safe street design, and other safety principles. The City of San Diego committed to Vision Zero and ending all traffic fatalities within 10 years, beginning in 2015. In 2019, 44 residents of the City of San Diego lost their lives unnecessarily due to traffic crashes. For more information, visit http://www.circulatesd.org/visionzero.

Traffic crashes are preventable. We can all do more to save lives so that San Diegans can walk, bike, roll, or drive without risking life or limb.

About Circulate San Diego
Circulate San Diego is a regional nonprofit organization dedicated to advancing mobility and making the region a better place to move, work, learn and play. We lead a coalition of more than 25 local organizations to support Vision Zero throughout the San Diego region.  For more information, visit www.circulatesd.org.
###