SAN DIEGO (August 22, 2016) – A pedestrian was killed early morning Sunday in a hit-and-run crash on the 4900 block of El Cajon Boulevard.

UPDATE (August 24, 2016) - Another pedestrian death was reported by San Diego Police. An unidentified 78 year old male was struck by a vehicle while he attempted to cross University Avenue Tuesday night. The driver failed to stop at the collision and was later taken into custody for felony hit and run and misdemeanor DUI.

These crashes are yet another reminder of how important it is for our region’s leaders to commit to Vision Zero, a campaign to make our streets safe from serious injuries and deaths. El Cajon Boulevard is one of the eight most dangerous corridors in the City of San Diego, as identified by research from Circulate San Diego in our groundbreaking Vision Zero report: http://www.circulatesd.org/visionzerosd.

In both cases, the pedestrians were crossing streets (El Cajon Blvd and Univresity Ave) identified by Circulate San Diego as the most dangerous in the City when they were struck by a vehicle and killed. The drivers both fled the scene.

The concept behind Vision Zero is that traffic deaths are preventable with strategic efforts such as safe street design, education, and enforcement. The goal is to reach zero traffic deaths and serious injuries by 2025. The program has been successful in other U.S. and European cities.

According to Jim Stone, Executive Director for Circulate San Diego, “No loss of life on our streets is acceptable. We can and must do more to ensure San Diegans’ right to safe mobility.”

Improving safe street design on El Cajon Boulevard is a goal for the City. City staff will be hosting a workshop tomorrow evening, August 23, to seek input on numerous design concepts. 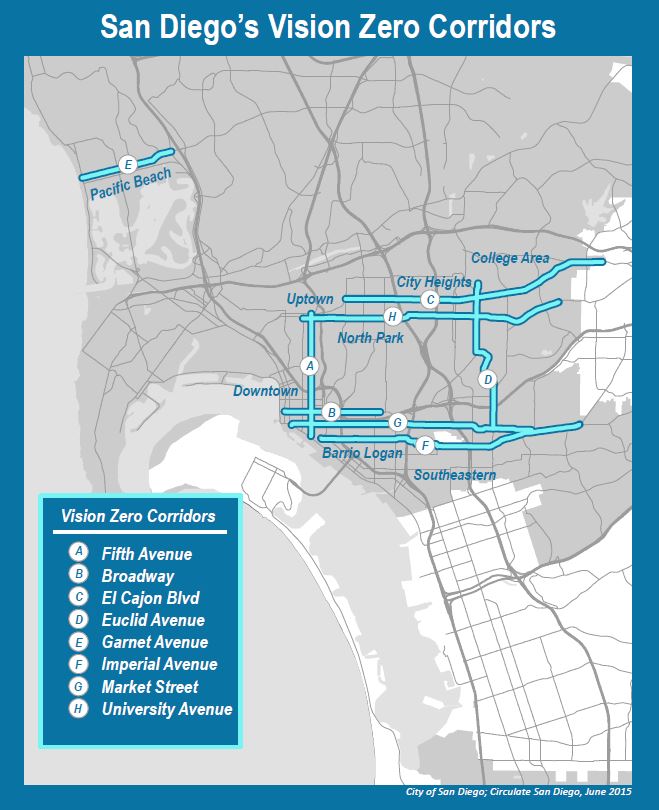