Vision Zero Moves Ahead Slowly but Surely in San Diego

It’s amazing to read about cities across the country embracing the common goal of Vision Zero, to eliminate traffic deaths and serious injuries to zero. In just over a year the movement has spread to more than 15 cities. These cities have quickly assembled teams of multi-disciplinary departments, dug deep into data to understand why crashes are happening, launched multi-media campaigns to provide education, implemented millions of dollars of safe infrastructure, and dived deep into the issue of equity which is at the root of the movement.

I’ll be frank: San Diego is not yet considered one of the leader cities in this movement in terms of robust programming, but the initiative is enjoying some success here. We at Circulate are pleased to see Vision Zero San Diego move forward. Yesterday in particular was a pretty good day. Two items of note are highlighted below.

1. The Mayor’s office convened the Vision Zero Task Force to review a One-Year Action Plan and dissect Vision Zero related items in the FY 2017 budget. Circulate San Diego and its coalition partners had been waiting for this meeting since March. We were dissatisfied with the draft plan and submitted a letter in April outlining items we wanted to see added. The revised plan included some of our asks, but not all. The plan still includes some good things, highlighted below:

Vision Zero is a 10-year strategy and the One-Year Action Plan is only that–one year to get it started. More is to come and we appreciate the commitment from Mayor Faulconer to fight for Vision Zero in the long term. Meanwhile, the Mayor’s office will publish the One Year Action Plan in the next month and Circulate will be there to support.

A map of proposed near-term Vision Zero efforts from the City of San Diego can be downloaded here: 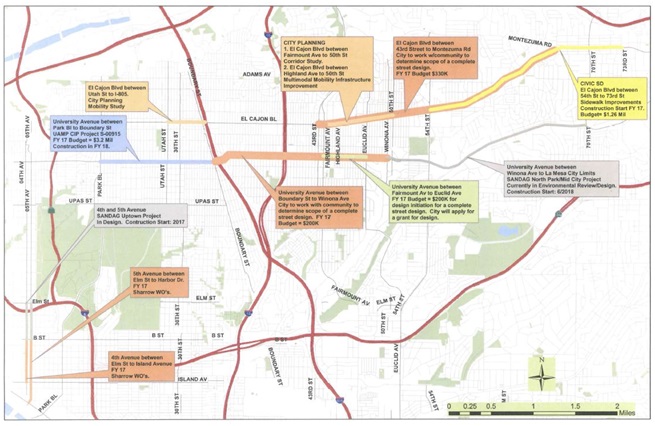 The full plan can be read here.

2. The “University Avenue Working Group”, convened by the City as part of Vision Zero, recommended a wider sidewalk, new roundabouts, center median, and buffered bike lane for a half mile segment of University Avenue in City Heights. This segment had been identified by City staff as having the highest concentration of crashes in the City. The recommendation came after at least six meetings, one community workshop, and outreach to nearby businesses. Other alternatives included a protected bike lane, and a wide, planted center median Boulevard style. 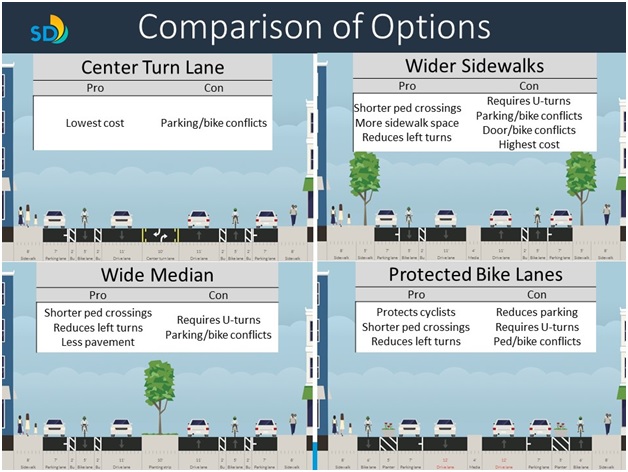 *All options include three roundabouts – at the intersections of Highland, Chamoune, and Menlo – but are not shown in these diagrams.

Circulate San Diego will be hitting the streets in July–along with City Heights Business Association and City Heights CDC– to seek additional input on the concepts from City Heights residents, and a presentation will be made to City Heights Area Planning Committee at their meeting in August.

No doubt, there is a tremendous amount of work yet to do. But Vision Zero San Diego has moved from a concept to an action plan, and projects for Engineering, Education, and Enforcement are moving forward. There is still more to come.