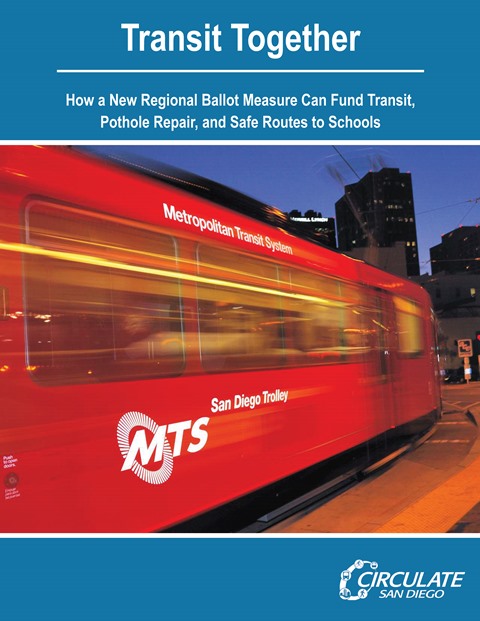 The voters in 2016 rejected a transportation ballot measure put forward by the San Diego Association of Governments (SANDAG). For the region to succeed with a new future ballot measure, leaders must learn from SANDAG’s experience.

A successful ballot measure must be created in an open and transparent manner, with input from a wide range of stakeholders. For a ballot measure to succeed, it must include bold ideas and compelling projects to generate excitement from new and diverse supporters. We can invest in San Diego’s transportation future, only if we act together.

A successful ballot measure could make a transformative contribution to regional mobility. More funding for transportation can contribute to greater mobility choices, economic development, and reductions to greenhouse gas emissions.

This report examines a wide range of options for decisionmakers to consider so that the strongest ballot measure is put forward to attract the support of voters. Included is an example expenditure plan to demonstrate how a ballot measure could appear from the San Diego Metropolitan Transit System (MTS). This report also examines some continuing options to do a similar measure through SANDAG.

MTS is currently exploring the feasibility of a ballot measure to fund improvements to its transit network.

This report finds that an MTS ballot measure could accomplish all of the following:

2)  Fund all of the $7.5 billion for MTS transit projects that were included SANDAG’s unsuccessful 2016 Measure A

3)  Dedicate billions of dollars to new priorities which might include: