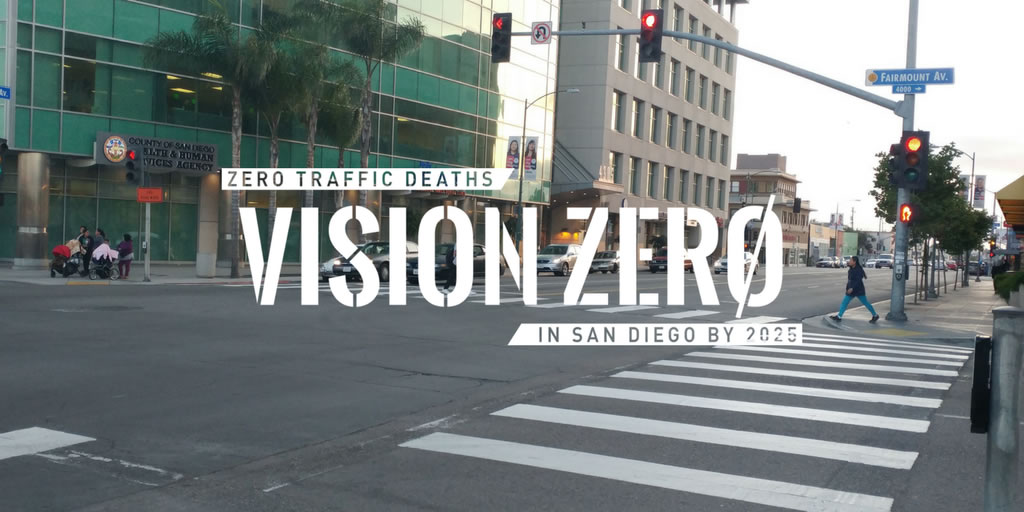 On May 18,2017 the task force convened and filled a conference room in the City’s Administration Building to the point that it began to feel cramped.  The task force is an advisory committee that meets once a month, comprised of City staff from various departments and advocates, including Circulate San Diego, that advises the Mayor’s Office on how to implement Vision Zero. Together they reviewed and discussed the efforts that are being made by the city to further the goals of Vision Zero. Many were excited to learn about the time and effort that is being placed by our local government to pursue funding that will help further their ability to bring better infrastructure that creates a safer environment for walking and biking in San Diego.

Among the accomplishments discussed at the meeting were several bike and pedestrian projects that are close to completion. Some of the highlights include a new median equipped with a pedestrian refuge and other crosswalk improvements on University Avenue, as well as pedestrian improvements along Orange Avenue between 49th Street & Winona Avenue. These projects were in conception well before Vision Zero; however, the goal of the initiative is to eliminate all traffic fatalities by the year 2025. That means that any project that improves traffic safety is helping accomplish the main objective of Vision Zero.

The Vision Zero strategy is to take a data driven approach to identify where collisions are concentrated in the city and prioritize improvements in the areas where our citizens are most susceptible to crashes. This strategy has been proven to significantly reduce traffic deaths and serious injuries throughout the country, and to encourage the city to look for funding that enables them to implement similar tactics.

One notable example is the University Avenue Complete Streets Project, which happened because analysis spurred by Circulate San Diego’s Vision Zero Report showed that it was one of the most dangerous road segments in the city.  The project will redesign a portion of University Avenue from Fairmont to Euclid with roundabouts, bike lanes, and extended sidewalks, and was just awarded a $5,400,000 Caltrans grant. More projects like this are critical to ensuring Vision Zero is successful.

The task force learned in May that the city has received a $250,000 grant from the Systematic Safety Analyses Report Program that will be used to conduct a thorough crash analysis in the City of San Diego. The report will ideally facilitate guidance in identifying problem areas, strengthen the city’s ability to pursue funding for improvement projects, and appropriately allocate funds to the areas that are in most need.

The San Diego Vision Zero Task Force has grown significantly since the adoption of the initiative in 2015. Circulate San Diego appreciates that the City of San Diego has embraced Vision Zero and we look forward to working with them as partners to help advance more successful projects like the University Avenue Complete Streets projects.

This update is funded by the Focus Cities California Program.

Focus Cities California is a program of UC Berkeley SafeTREC and California Walks.